Home » Anxiety » How to stop comparing, improve low self esteem and increase your self confidence

How to stop comparing, improve low self esteem and increase your self confidence 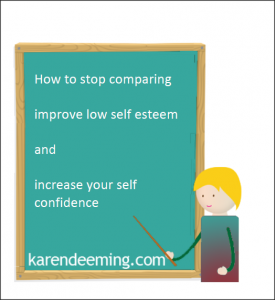 For those of you who are unfamiliar, social comparison theory is how we determine our own social and personal worth based on how we stand up against others. It is a process whereby people, like you and I, evaluate ourselves, to a certain degree, by examining their own qualities and abilities with those of others.

It manifests as an inner voice or negative chatterbox that often goes something like this:
• I wish I could stop comparing myself to other people
• If only I could overcome these jealousy and envy feelings because they hold me back
• Why can’t I just accept myself for who I am?
• Why do I talk myself out of doing incredible things because I am afraid to discover if I’ve got what it takes?
• Why haven’t I got as many facebook likes or twitter followers as my friends or business competitors?
• Why am I less attractive then my best friend?
• I wish I could afford a nice house and expensive car like my boss at work

I, Karen Deeming, am now doing my dream job as a successful Consultant, Psychotherapist and Mindfulness Teacher advising film Directors, such as Mike Leigh, on the authenticity of film narratives involving psychotherapy. But it wasn’t always like that, I too was often crippled by the comparing virus in my well-paid secure corporate job until one day I stopped comparing and started daring:

Lots of wealthy people and celebrities also adopt unhealthy behaviours such as excessive drinking, cocaine use and eating disorders and though they appear confident are often experiencing low self esteem so why’s that then?

If you recognise any of the issues highlighted in this blog you are not alone in this very common dilemma.

Face to face or on line counselling or a personal development or mindfulness course can help you to overcome going around in circles and to stop comparing yourself to other people.

So, if you need a bit of extra support and encouragement and a few counselling or mindfulness sessions why not contact me Karen Deeming to arrange an appointment or for a short free introductory chat on 07950 751352 or by emailing us on info@karendeeming.com