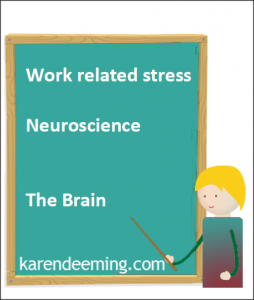 Does this sound familiar? You’re feeling a bit tense with a tightness in your chest or butterflies in your stomach. You search your mind for the reason why and before you know it has reached a number of conclusions:

• an incident at the office a few days ago
• a tricky chat with a loved one
• or a looming unreaslistic deadline at work.

Suddenly, you begin to feel totally overwhelmed and stressed, paralysed to do anything because you’re caught in the middle of a viscous circle of negative automatic thinking patterns………

Do you know why this happens?

It’s a phenomenon called “negativity bias,” a name coined by Psychologists, describing our human tendency to be much more likely to be influenced by and to recall negative experiences, instead of neutral or positive experiences.

So the good news is that work-related stress, anxiety and automatic negative thoughts are not wholly your fault it’s just the way your brain is wired and you can take steps to address this.

So instead of giving yourself a hard time, be kind and compassionate, reassuring yourself that you’re pretty normal and not alone in this very common dilemma.

• We recall negative feedback more than we remember praise.
• Unpleasant events tend to be more memorable than pleasant ones.
• The brain is programmed to be vigilant and wary.
• The brain reacts more strongly to negative stimuli than to positive stimuli. Studies indicate that there’s a greater flow in electrical activity in the brain when we visualise a negative image such as a dead cat than when we witness something positive like a glass of prosecco or yummy lemon cheesecake.

How can Neuroscience and a knowledge of the brain help with work-related stress?

For those of you who are unfamiliar, Neuroscience is the study of how the nervous system develops, its structure, and what it does. Neuroscientists focus primarily on the brain and its impact on behavior and cognitive functions

Neuroscience is an increasingly wide ranging subject. Perhaps because the brain is one of the most complex structures in the known universe:

• intricate enough to coordinate the fingers of a classical violinist
• or logical enough to introduce the laws and theories of gravity.

Now let’s take a brief glimpse at the brain

The right hemisphere is generally associated with creativity, communicating emotion, analysis of nonverbal information and the control of the left side of the body, temporal and spatial relationships.

Whereas, the left hemisphere is usually identified with logic abilities, casual relationships, sequential thinking, controlling the right side of the body and producing/understanding language and complexities.

The limbic system sometimes referred to as the “emotional brain” is usually considered as composed of the following:

It is the site of: emotional states and behaviour; the bridge between the conscious and subconscious brain and short term memory/ information storage, especially short term recognition of facts, objects, people etc.

The amygdala, the brain’s alarm system is located in the limbic system. Its key function is to call you to attention, and in an emergency, to mobilise or shut-down your body and mind so that you’ll survive.

Sadly though, this alarm rings automatically and unnecessarily often incorrectly informing you that you are experiencing a flight or fight situation when the actual reality is that you are not and the alarm is just being over cautious.

When our amygdala misinterprets a bodily sensation such as sinking stomach to be a message of despair and pessimism, it has exactly the wrong result, reducing rather than enhancing our attention and alertness.

That’s why anxiety, frustration, anger and other chronic stress reactions can occasionally, or for some people frequently, escalate into huge problems. Put simply, we’re not using our amygdala as effectively as it was intended.

How can you tame your amygdala then?

Having studied this topic for many years now, by far the most comprehensive, informative book about neuroscience and the emotional brain I have read so far is the Chimp Paradox by Dr Stephen Peters.

As Coach of the Great Britain Cycling Team, and many business leaders, Peters developed a highly successful mind management programme using the term “Chimp Brain” as its premise.

Peters asserts that “Chimp Brain” is an emotional part of our brain designed by evolution to support our survival.

Specifically, it is the area of the brain which activates the fight-or-flight response, hyperarousal, hypervigilance or the acute stress response, physiological reactions that occurs in response to a perceived harmful event or threat to our survival.

As it is fundamently concerned with two main instincts:

for example: sexual reproduction, hunger, thirst and protection of our territory.

The “Chimp” automatically jumps to opinions in the absence of concrete facts and may be paranoid, periodically resulting in catastrophic and irrational behaviour.

According to Dr Peters, the Chimp works on impressions, perceptions and interpretations, not facts and responds up to fives times faster than our rational brain.

Two other terms are also used by Peters, the Human Brain and the Computer.

This Peters describes as the rational part of the brain highly effective at considering all the available facts and evidence and subsequently reaching careful and deliberate conclusions using cognition. It’s also where our highest values of humanity reside and it works five times more slowly than the chimp.

You’re probably asking yourself right now how does all this relate to work-related stress then?

Peters argues that before taking any action, we firstly need to recognise these three powerful structures are continually operating in our mind. Furthermore, if we do not acknowledge this we will be perpetually running to catch up with ourselves.

This reminds of the mindfulness approach

Though we can’t stop our thoughts, feelings or physical sensations, we can take charge of what happens next. We can consciously step back, pause, breathe and choose to observe our negative thoughts rather than responding to them immediately.

Here’s some tips to help you regulate and tame the Chimp and as a result handle work-related stress more effectively:

1. Acknowledge that we as Human beings developed a negativity bias, that is, we evolved to notice and respond more forcibly to the negative, since that helped our ancestors to stay alive. Thousands and thousands of years ago, it was more important for cavemen to escape negative situations than it was to approach opportunity.

2. As it’s your “Chimp” it will respond sometimes when you are angry, stressed or perceive any kind of threat, physical or psychological, and it moves much more quickly than the Human part of your brain so is likely embarrass you with its responses. It might shout and rage, be rude and angry or violent.

3. Observe Chimp-like responses, these are easy to spot, they are responses which when you reflect later aren’t ones you’re proud of. They are likely the ones that if you had your time again you’d do differently, or they are the responses that you might, with the benefit of hindsight, think you need to apologise for.

4. Be aware that everyone has a Chimp and managing it is an everyday challenge, when we’re tired or stressed our Chimp becomes more difficult to control and can overwhelm us more easily. Observe other people’s responses, you can see Chimp behaviour everywhere.

5. Having become aware of your Chimp, you can work on taming it and rather than ignoring the Chimp’s instinctive and rapid reaction, just allow it to have its say. Then, consciously step back, pause, breathe and allow yourself more thinking time to work out a better, more considered Human response.

6. We can use the Computer part of our brain, our automated habits, to put in responses faster than the Chimp can react. This takes time and practice, but if we make a conscious effort to put in a different response to the impulsive Chimp one, we can develop what Peters calls an Autopilot, which is a script or response that overrides the unhelpful Chimp response before it can be enacted.

This rather reminds me of one Mindfulness tip I offer clients:

When you experience a negative thought, feeling or physical sensation, breathe, pause, step back then ask yourself the following question:

“I know that if I allow my negative thoughts to take over it is not healthy for me and leaves me feeling anxious, I also know that though I can’t stop my thoughts, feelings or physical sensations, I can change what happens next, such as, consciously deciding to stop myself from catastrophising or getting too attached to my thoughts.”

“I know that thoughts aren’t facts”

Following your attempts at implementing the above strategy, record on a piece of paper the process of what happens when you try this technique and the automatic negative thoughts that stop you from supporting yourself.

Understanding how your brain became so vigilant and wary, and so easily hijacked by alarm, is the first step toward gaining more control over that ancient circuitry.

Then, by bringing mindful awareness to how your brain reacts to feeling threatened, you can stimulate and therefore build up the neural substrates of a mind that has more calm, wisdom and sense of inner strength.

A mind that sees real threats more clearly, acts more effectively in dealing with them, and is less rattled or distracted by exaggerated, manageable, or false alarms.
You can book your appointment here or you can contact me on  (044) +7950 751352 for outside the UK or 07950 751352 inside the UK.  Alternatively  by email: karen@karendeeming.com.